To say about shakshuka that it is scrambled eggs with tomatoes is like saying: sushi is rice balls with fish. On the other hand, the basis of the dish really consists of tomatoes and eggs. But shakshuka in Israel, it’s something more. A kind of national pride. Shakshuka came to us from North Africa, where she was also called, chakchuka or tuktuka. Shakshuka can become a full breakfast or even lunch. You can cook it for dinner, but if in one of the places of the Israeli catering you ask to give you a shakshuka for dinner, you will see a surprise on the face of the waiter or the owner of the establishment.

There are many different options for preparing shakshuki. Shakshuka can be with a more liquid sauce or thicker, sharp or not, with solid yolks or as a fried egg. Everyone prepares it for their own taste and in accordance with the availability of those or other products in the refrigerator. I, for example, cook it without onions and like to add oregano.
We will do with you a basic version of shakshuka and consider the options for additives.

Ingredients
For the basic variant (counting on 2 people, so that they are full):
10-12 medium or 6-7 large tomatoes. You can use overripe tomatoes or soft, which are no longer suitable for salad
2-3 cloves of garlic
1 spicy pepper (Pila Tare, Harif — in Hebrew). A quarter is spicy, half is sharp. It can be replaced with a spicy paprika (in Hebrew: paprika harif) or other spicy seasoning.
Paprika is sweet (in Hebrew: paprika metuka) (if not — not scary)
Eggs — who loves how much, according to the number of eaters (usually 2 eggs per person)
Salt
Olive oil (you can use other vegetable oil)
Frying pan, not very large.

How to make Israeli shakshuka 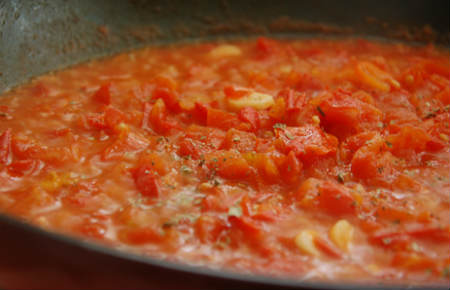 You can make shakshuku with other different additives: mushrooms, ham, various cheeses, grilled vegetables and so on. Add and fry them on the stage before the garlic and tomatoes.
At the seasoning stage, you can add basil, oregano or a theater (in Hebrew both words sound exactly the same). The plant of the theater is a Mediterranean version of oregano, from which the same seasoning is made here.